Is it safe to give your dog meat that’s gone bad? Better not to risk it! Your dog might be willing to eat anything you give him, but that doesn’t mean that it’s safe.

Our canine friends have been eating our leftovers for tens of thousands of years. In fact, that may be one of the most important factors that helped turn wolves into dogs.

However, part of our ancient pact with our furry companions is that, while they contribute their keen senses, we provide our better judgment. Your dog is trusting you to feed him only safe food.

Can Dogs Eat Spoiled Meat? No. Experts advise that any meat you wouldn’t eat yourself is probably unsafe for your dog as well. You should not feed your pet spoiled meat that smells bad, nor any meat that appears slimy has visible mold on it or has a discolored appearance.

Dogs have different digestive systems that are better at resisting certain bacteria. However, this is not a perfect defense!

Dogs can get food poisoning. This can cause them discomfort and misery, and may even lead to permanent injury or death.

Contents show
Will a Dog Eat Dangerous Food?
How Are Dogs’ Digestive Systems Different from Ours?
What to Do About Your Dog’s Digestive Problems
How to Keep Your Dog from Eating Spoiled Meat
Final Thoughts on Can Dogs Eat Spoiled Meat?

Will a Dog Eat Dangerous Food?

If you have dogs in your life, you may have noticed that most dogs are not picky eaters. Dogs will eat raw meat, rotten meat, roadkill, and things that offer no possible nutritional value.

But just because your dog can and will eat it doesn’t mean that he should!

Some people think that dogs won’t eat food that could be dangerous for them. After all, they have millions of years of evolved instincts and a sense of smell thousands of times better than ours.

However, this is a dangerous myth. Dogs can certainly smell better than we can, but smells don’t mean the same thing to them that they do to us.

Consider, for instance, that humans generally consider the smell of roadkill to be repulsive, even nauseous. Yet some dogs will roll around in it, trying to perfume themselves with the noxious scent.

Some scientists even think that this is literally a perfume – that dogs get the scent of rotting meat on themselves deliberately in order to appeal to the opposite sex!

Something that smells repulsive to you might smell good to your dog, even though his sense of smell is much more powerful. For your pet’s health, it’s best not to leave to him the responsibility of deciding what’s safe for him to eat.

How Are Dogs’ Digestive Systems Different from Ours?

Dogs are omnivores, like humans, but they’re approaching it from the opposite side. The ancestors of humans were herbivores, but dogs are descended from wolves.

Wolves have a more varied diet than pure or obligate carnivores. Wolves have been observed to eat nuts, seeds, and berries in the wild, but it’s still only a small part of their diet.

Pure carnivores like cats can really digest little but meat. Dogs still digest meat best, but they are able to digest carbohydrates and can eat a much wider variety of foods than cats can.

Still, as dog owners know, there are a lot of things that humans can eat that dogs can’t, such as citrus fruit, garlic and onions, macadamia nuts, and of course chocolate. Never feed your dog any of these!

Dogs have some digestive adaptations which allow them to digest meat more easily than we do. Their stomachs produce more acid, and their intestines process food much faster.

A dog’s stomach produces much more acid than a human’s – by some reckoning, 100 times more. This not only kills more bacteria, but it also softens things that our system can’t deal with, such as gristle, hooves, and even chunks of bone.

Dogs need this adaptation because they can’t chew as well as we do. They lack the grinding rear teeth that humans have, and their saliva doesn’t begin the digestive process like ours does.

Humans need about 24 hours to process a meal. Dogs only need about one-third of that time – about 8 hours. This can also help to protect them against food poisoning, as harmful bacteria don’t get as much time to build up in the gut.

But again, these are not a perfect defense! Dogs can get heartburn, food poisoning, and even botulism, just like humans. 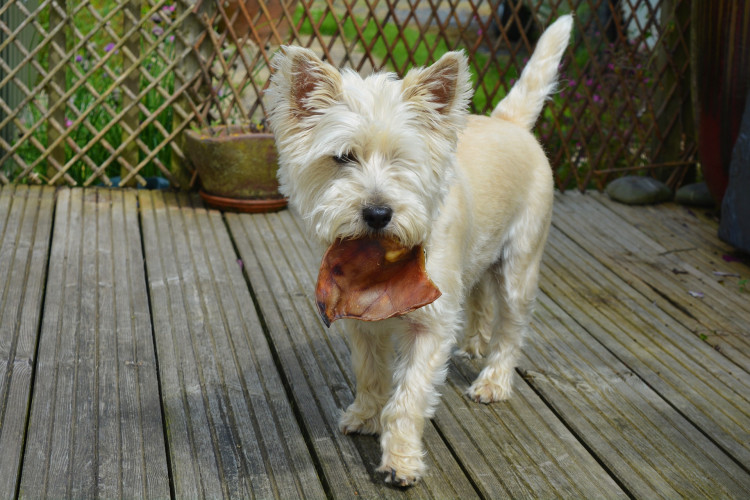 What to Do About Your Dog’s Digestive Problems

In order to protect your dog’s health, you need to monitor his digestion and understand what to do in case of problems.

Veterinarians recommend that you observe your dog’s health by observing the appearance and consistency of his poop.

This may sound disgusting, but it goes naturally with your other responsibilities. You can do this while you clean up after your dog on walks or in the back yard.

Any significant variation shows a potential problem which you should keep an eye on. Diarrhea, constipation, and abnormal stools are all signs that your dog may be experiencing health problems as a result of eating spoiled meat or something else that doesn’t agree with him.

If any of these go on for more than a day or two, depending on severity, or if you observe blood in your dog’s stool, you should consult a veterinarian immediately.

You should also watch your dog’s behavior. If your dog appears to be having stomach discomfort, he may be suffering from heartburn.

Although dogs produce more stomach acid than humans, it’s a very similar acid, and they can get too much of it just like we can. The same remedies can work for them, too, so dogs may benefit from over-the-counter antacids. However, you should always consult your veterinarian before giving your dog any medication.

Vomiting is often a sign of food poisoning. One or two episodes of moderate severity may mean that your dog’s system is cleansing itself naturally.

But prolonged or severe vomiting is a cause for concern and you should consult your veterinarian. They can help determine whether additional care is needed and how best to care for your pet.

Other causes for concern include trembling, weakness, and paralysis of the hind legs. These can be signs of botulism, which can result from eating spoiled meat and is just as life-threatening for dogs as it is for humans.

The good news is that your veterinarian does have an anti-toxin for botulism. However, time is critical! The earlier it’s administered, the more effective the anti-toxin will be, so it’s crucial to contact your vet at once if you observe these more severe symptoms.

How to Keep Your Dog from Eating Spoiled Meat

Of course, refraining from giving your dog spoiled meat is only part of the solution. Our pets have minds of their own! That’s why we love them so much, but it’s also a source of problems because they don’t always make the best decisions.

Dogs are known to eat carrion that they find outside, and it’s also not uncommon for them to turn over waste cans and devour the garbage. This can be dangerous for them, so it’s best to prevent this sort of behavior.

If your dog spends a lot of time in a fenced yard, keep it free of temptations. Don’t keep trash cans inside the fence. Check the yard regularly for any kind of hazard, and pay attention when your dog seems very excited about something he finds outdoors.

Indoors, use a trash can with a firmly attached lid, ideally one that’s too heavy for dogs to knock over easily. When you throw out spoiled meat, go ahead and take the bag out, even if it’s not quite full yet.

When you throw the meat out, place it inside a sealed freezer bag. Not only will this make it tougher to get at, but it will also keep the scent from enticing your dog into bad behavior.

One reason that dogs may knock over trash cans is boredom. Providing your dog with toys can help. But the best cure for boredom is plenty of exercise – and, of course, interaction with you!

The short answer is no. While most dogs have a higher tolerance for many meat-based pathogens than the average human, dogs are still vulnerable to food poisoning and you should not feed your dog spoiled meat.

In some cases, such as botulism, food poisoning can be a life-threatening crisis for our canine friends. Neurological symptoms like weakness, loss of coordination, and paralysis deserve an immediate call to the vet!

Even milder cases can feature heartburn, diarrhea, and vomiting. These can be just as uncomfortable for our pets as they can for us!

It’s a shame to waste food, but you should never feed a dog any meat that’s so spoiled that you would never eat it. The safety and comfort of your pet are too important to risk.