Golden retrievers are some of the most popular dogs in America. These dogs are so widespread that many shelter mixes also have golden retriever heritage.

However, golden retrievers are also some of the most energetic dogs, especially for their size. Many people ask “how often should you walk a golden retriever puppy,” and the answer is that these pups need quite a bit of exercise.

If your golden has behavior problems, there’s a good chance you’re not walking them nearly often enough. This guide will help you learn just how much exercise your golden needs for their age and lifestyle.

How Often Should You Walk a Golden Retriever? Ideally, you should try to walk a golden retriever every day or every second day. A healthy, young golden retriever needs at least one hour of exercise a day. This exercise can take the form of walks, playtime, or running around in the backyard – whatever works out for you and your family.

If your golden retriever is particularly rambunctious, you might consider upping their exercise to two hours a day. Your golden will let you know when they start to get tired by panting, walking more slowly, and coming to your side for attention.

Golden retriever puppies need less scheduled exercise than adults, but that’s mostly because puppies already live a movement-heavy lifestyle. In fact, forcing a small puppy to go for long walks can be incredibly bad for their joints and can cause arthritis later in life.

In general, the assumption should be that your golden retriever puppy needs about ten minutes of exercise a day for every month that they are old. This means that a year-old golden retriever should be exercising for an hour and twenty minutes a day, which is the perfect amount for a healthy and happy pup.

As golden retrievers start to age, their exercise needs drop drastically. It’s not surprising to find out that a grey-haired golden just can’t make the full hour of exercise anymore. Follow your dog’s lead, and don’t push them to walk more than their joints will allow.

By the time your dog is ten to eleven years old, they may only want to get about half an hour of exercise a day. For many geriatric dog owners, this means taking your pet for a casual daily stroll at a nice and easy pace.

Don’t forget to make time for high-energy moments like a quick game of fetch at your favorite park. Just like humans, dogs stay healthier if they get to participate in a mix of different physical activities. 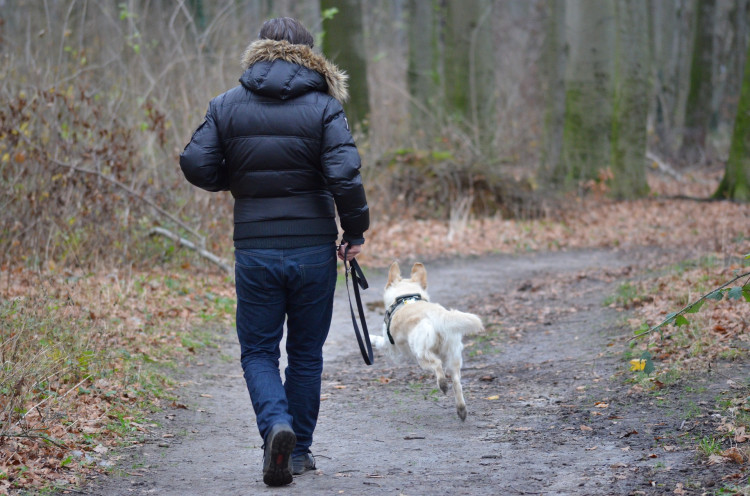 Why Your Golden Retriever Needs Exercise

It’s one thing to say that dogs need exercise, but do you actually know what happens if you never take your pet out for a walk? When some owners realize the consequences, they often find it easier to make time for their canine friend.

The first thing that most people notice about a dog that doesn’t get enough exercise is that they’re usually packing extra pounds. Animals need to move around to burn off calories. If they don’t, they’ll gain weight, just like their human parents.

Golden retrievers are particularly susceptible to weight gain because they are a food-driven breed. These pups love to dive into their breakfast, beg for scraps throughout the day, perform tricks for treats, and finish everything off with another bowl of kibble before bedtime.

Many dog owners like to solve the obesity issue by reducing their pet’s food intake. It’s true that if a dog consumes fewer calories, they won’t have as much to burn. However, because golden retrievers love to eat, this tactic can often leave you with an anxious and miserable pup.

Instead, the easiest and most positive solution is to take your golden retriever out for more and longer walks every day. If you’re actually giving them enough exercise, you should be in the clear to sneak your pet a few tasty scraps.

Golden retrievers are high-energy dogs. They like to run, play, bark, and generally be involved with their owner’s lives. There’s never a boring moment with a golden around – just as long as you provide them the exercise they need.

However, if your golden doesn’t get enough exercise, you can expect them to look for other ways to let off that extra steam. Most canine behavior issues come from a lack of exercise and can be solved by increasing the dog’s physical movement.

Some of the main behavior issues that crop up when your dog is bored include barking, chewing, and scratching or digging. Dogs don’t have many positive outlets for their feelings, so they typically channel frustration by finding something and destroying it.

This means that if you find your shoe torn to pieces after you’ve locked your dog inside the house all day, you really shouldn’t be that upset. Your golden retriever is chewing on things because they are bored and under-stimulated.

Many dog owners feel confused when their dog has behavior issues even when they’re going for a daily walk. The simple truth is that if your dog is not tired after their walk, you haven’t been giving them enough exercise. Try taking your dog out for a second walk, or find another way to increase the length of time you spend with them during your daily routine.

If you’re struggling to spend enough time with your golden retriever, you should consider adding canine exercise directly into your daily schedule. Otherwise, you’ll never “have time” as you expect to at the end of the day, and your dog will go without the walks they need.

First, decide whether you want to start or end your day by spending an hour with your dog. Some people love to take their dog out first thing in the morning so that both pet and parent can enjoy the sunrise and crisp, dew-filled air. Other owners feel like a casual stroll around the neighborhood is the perfect way to end a fantastic and productive routine.

One thing to consider is that if you choose a morning walk, your dog will be tired for the time that you’re at work. If you wait to walk your dog, they might get destructive and bored before it’s time to talk that precious walk.

Either way, try to take your dog out at the same time every day. It allows your pup to build up expectations that they can rely on, which is great for canine psychology.

Once you’ve blocked out a specific daily time that’s dedicated to your dog, don’t fall for the classic trap of only interacting with your dog during those scheduled times. Too many owners get inside, remove the leash, and don’t think about their furry friend for the rest of the day.

In addition to your regular walks, make a habit of taking your dog on a random extra walk whenever you have the time. A quick jaunt around the neighborhood will make both of you feel better. It will also make sure that your dog is capable of breaking routine when they need to – something that’s important for preventing the anxiety that’s caused by canine rigidity.

In general, recognize that a golden retriever with behavior issues probably isn’t getting the exercise that they need. An adult golden retriever needs to be walked every day for at least an hour; anything less, and they’re probably going to act up.